Admittance to ΦBK is by invitation only.  Each year, members of Saint Joseph’s ΦBK society form a selection committee to review all eligible juniors and seniors.  In April, the chapter secretary invites students to join our chapter. 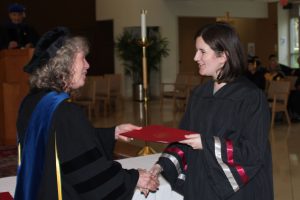 A student from either the College of Arts & Sciences or the Haub School of Business is eligible, provided that (s)he will have earned ninety liberal arts credits and will have satisfied at least half of the requirements for some particular liberal arts major.

The selection committee looks at all eligible seniors and juniors with high GPA’s and compiles a list of candidates to be recommended to the general membership for election to ΦBK. The process is highly selective: less than ten percent of eligible students are elected, and of these, most are elected as seniors. 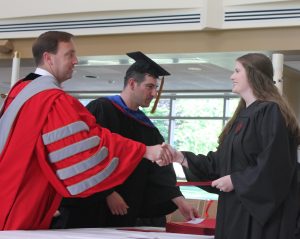 The committee looks for students who have high GPAs (roughly 3.5 for seniors and 3.8 for juniors) and who show evidence of academic accomplishment in the liberal arts (such as doing original research, taking on a minor or a second major, studying a second or third language, taking courses beyond minimum-requirement courses, etc.).

In the case of juniors, the Committee requires more evidence than just a high GPA before it will recommend a candidate.

Each year, the chapter secretary solicits letters of recommendation from the SJU faculty.  Faculty are invited to write letters of recommendation to nominate juniors or seniors.  Letters should discuss the student’s academic accomplishments and point out any intellectual challenges, especially non-obvious ones, that he or she has taken. (Do not catalog the student’s service attainments; laudable as these are, the national organization specifically enjoins any chapter from considering them.)

The membership requirements as stated by the national chapter of ΦBK can be found by clicking HERE. 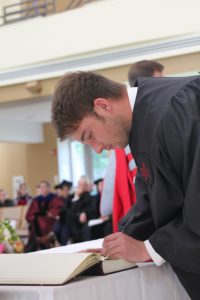